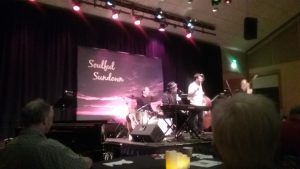 Last night I went to see Kenny White perform in Manhasset. It’s the third or fourth time I’ve seen him. He is one of my favorite musical performers, and in my opinion one of the best singer-songwriters alive. And you haven’t heard of him (unless you’d seen my previous blog), right? I wish I could explain why. He’s very well respected in musical circles. He’s produced Peter Wolfe’s albums, has worked with David Crosby and has toured around the world. His albums have received spectacular reviews, as they should. So why is he still playing small venues and has he struggled so much for air play?

I think the only explanation is that his music isn’t commercial, which is ironic since he began his career writing musical commercials. Not only doesn’t he write and perform the kind of standard ditties that have two, maybe three verses with repetitive choruses, he actually wrote a song, “Gotta Sing High,” which parodies such a non-artistic approach. His songs are stories, laden with poetry, humor, emotion, politics, romanticism, vulnerability and genius, touching inner truths. Amidst the drek of much of today’s music scene, how about a lyric like, “Even shards of glass can pass for diamonds in the sun?” On top of it, he’s a brilliant musician, especially keyboardist, his melodies spanning from folk to jazz.

I’ve emailed and spoken with him a number of times. He’s also one of the nicest, humblest people I’ve met. And maybe that, mixed with his penchant for generosity and charitable performance, and what I have come to assume are some experiences with insecurity and pain, could be involved, too. (Our pains do seed our artistry after all). I say “assume” because, while I don’t really know him or his non-musical story, it seems like I, along probably with many others, can know and relate to him on many levels through his music. But who wants to say something so cliched and creepy-sounding to a celeb?

My history with Kenny White is another story, or should I say several. The first time I was introduced to him by way of his performance was on a pseudo-date. I had met this woman on a dating site and we had gone out once, but it was not a match, made in Heaven or “Cyberspace” (one of the best songs on his new album incidentally). For some reason, months later she contacted me and told me she had bought two tickets to an expensive benefit for the Japanese Tsunami victims, and asked if I’d like to accompany her. I could hardly turn that down, right? But I would have to buy her dinner, right? We were to meet by Penn Station, and I figured a local Chinese restaurant would be fine, but she really wanted to go to a favorite of hers across the street. I checked it out before she arrived. It was in a hotel, and when one walked in one confronted a bar teeming with loud businessmen coming off work. Pink neon lit my way to the back, where there was an ultra-pretentious little restaurant whose menu was so overpriced that I met my companion at the door and tried to block entry, ready to offer other suggestions. But she slid through, and proceeded to order the most expensive thing on the menu, filet mignon. I was going to ask if they had melba toast and water, but I figured, why deprive myself just because I couldn’t afford this? So I went for something I had seen on Gordon Ramsey and had enjoyed once before, Chilean Sea Bass. Mmmm…. Only this one wasn’t nearly as good as the much cheaper one I had eaten before, and it was accompanied by some tasteless asparagus and a little pancake of unknown composition. And then, after plunking down about a hundred bucks, we were off to the show.

As we were walking we passed an Applebee’s, and I commented that I remembered it, that I had taken my son there. She scoffed and replied with something like she wouldn’t be caught dead in such a place. When we turned the corner and headed up Eighth Avenue, we passed a row of parking lots, inviting desperate cars to rest awhile for about $70 a second. I was beginning to realize why I could never move back to New York and why I had never anticipated reuniting with this woman. We came to a side street, and then to a basement door painted black. When we entered, I was thrust into a Woody Allen movie. The night-crawling New York nouveau riche were out in force, basking in yet more neon and pretentiousness. There were to be some musical acts and an auction, so we took our seats. The first act was promising. It was someone who had crafted and played his own African-style instrument, but he only did one number. Following him were two forgettable acts, except for their awfulness, who were allowed two and three respectively. And then someone appeared at the piano, and within minutes I was writing down his name: “Kenny White.”

Following his three song performance was the auction. Two women took the stage and unintentionally brought back memories of an old Saturday Night Live skit involving two shills on the Home Shopping Network who were clueless about their lack of humor. They were auctioning off autographed guitars, one signed by Eric Clapton, one by Will Lee, the head man of the “Faux Four,” a Beatles knock-off band who were the headline act and the reason for my companion wanting to come, and the rest by cousins-in-law of other celebrities. Sitting two rows in front of us was someone who was obviously in the Russian Mafia, who had brought his arm candy, for whom he would bid on everything. But he had competition, a woman sitting on the other side who had apparently decided that her precious little daughter deserved not one, but two ultra expensive autographed guitars. I continued to squirm in my seat. When that was over, out came the Fab Faux, or whatever they were called then. And they were terrible. By the third song I was ready to leave, and asked my “date” if she wanted me to walk her to the train. She decided to stay, and I left, with distasteful memories, but for that slip of paper with the name “Kenny White.”

The next time I saw Kenny White, intentionally, was in a library auditorium in Westchester. This library ran Wednesday afternoon events for the seniors, so I was there, at what I seem to remember was also a benefit for something, seated in the front row and surrounded by people who had no idea whom they were about to listen to. There were two highlights of that day for me, which would be one more than on the previous occasion. First, I had the opportunity to make a request, “Out of My Element,” which he accommodated, even switching from guitar to piano for me. The other was when I gave him the “White Diamonds: The Greatest Hits of Kenny White” CD, which I had compiled and burned, for him to autograph. He didn’t even know he had a greatest hits album, as he commented.

I could swear I saw him another time between then and last night, but what I do remember were two near misses. The first was when he finally returned again to his home town, where he was playing in this fancy joint that he had told me he felt as out of place in as I expected to be. At the time I was pseudo-dating someone, formerly a supervisor and flaming hot redhead from a quarter century in the past, whose birthday was the same day. I had arranged for a ringside table and orchids to be delivered… but I got sick. So did the relationship. (God, I hope these women aren’t reading this. Nah, no one does.)

The other time was January of this year. Kenny was playing in Massachusetts, and I got tickets and a HomeAway rental to surprise my now girlfriend, not even telling her where we were headed or why. When we left, the weather report called for a dusting to three inches of snow. When we reached the ferry it was three to six inches. As we drove through Connecticut to Massachusetts it became six to nine, and by the time we were watching the TV in the bar-restaurant I had unfortunately picked out for brunch it was “run for your lives.”  I have to add that while she ordered sensibly, I never miss an opportunity to try something new, so I partook in their “Dad’s Favorite,” which turned out to be a greasy burger patty with a hunk of canned chow mein buried in crispy noodles. Mmmm….

Hoping for a miracle, we returned to our rental, a beautiful little house which was recessed a mile in from the road. The concert was scheduled for the next day, and we were starting to wonder if, a., we would die in the snowstorm, as no one would be able to reach us through a foot and a half of snow along a narrow mile-long path in the woods, b., we would die trying to make it to the concert, or, c., worst of all, the concert would be cancelled. I won’t bore you with the details of the dinner fiasco (you can read about that in a previous blog), but when we returned in the evening I finally checked my not very smart phone for any email updates. Going backwards chronologically, I ran my eyes over one from Kenny White, which started, “hope the postponement wasn’t too big a drag for you….” Then I ominously went further back and came upon one that had been sent at the precise moment that we had first set foot in the house, informing us that the show had been cancelled. If I had only checked, or if my damned phone had notified me, we could have turned around and driven back in the light of day, while the snow hadn’t accumulated much. As it was, we decided to wake up really, really early (and no, that wasn’t noon, as “really, really early” means to me now) and catch the first ferry back, blowing the vacation stay and losing another opportunity to see him perform, which we finally made up for last night.

Anyway, my reason for writing this is obvious. If you insist on not buying my books (ahem), at least buy his CD’s. I promise you that you won’t be sorry, unless, of course, you don’t have a particular fondness for music, poetry, humor, pathos, politics or love. I’d put up a portion of one of his songs, but I don’t think that’s up to me to do. So here’s a link: kennywhite.net. And no, I don’t get a commission.