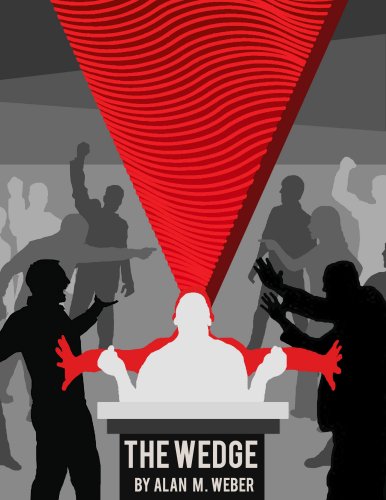 The next great American novel has arrived. In the footsteps of “Mr. Smith Goes to Washington” and “The Manchurian Candidate” comes “The Wedge,” a tale of political allegory, insight, and intrigue.

Steven Wellstone is a political scientist who is so frustrated with the way politicians use wedge issues, scapegoats, distractions, and lies to divide and manipulate the public to their benefit come election time, that he decides to do the unthinkable.

He becomes one. In a plan to expose just how vulnerable the electorate is to political manipulation, Wellstone intends to use every dirty trick in the politician’s magic bag, develop a following and then expose the truth. But as with many a ‘best laid plan’…things don’t quite work out according to said plan. Funny, infuriating, heart-wrenching, enlightening, poetic, thrilling, provocative and full of unexpected twists, The Wedge is a must-read, particularly as the pre-election madness begins to build.

About the Author: Alan M. Weber has been published under this, his real name, and under a pseudonym. His most recent published work is a children’s book on war titled “Not for Hurting”. He has also written and published a multimedia memoir with universal themes, an essay in Education Digest on “The Misdirection of Modern American Education,” and poetry. He has been a college professor for a quarter century, holding an undergraduate degree in political science and a graduate degree in education.

Synopsis: In the footsteps of “Mr. Smith Goes to Washington” and “The Manchurian Candidate” comes The Wedge, a novel of political allegory, insight and intrigue. It centers on Steven Wellstone, a political scientist who becomes so frustrated with his efforts to expose the deceit and corruption in the political system that he decides to do the unthinkable. Only things don’t quite work out as he had planned….

Critique: What extremes are necessary to break out of gridlock, or purge corruption from politics? To what lengths can one fight the system without perpetrating something even worse? A saga of high-stakes tension, unlikely gambits, and one man’s efforts to bring change at any cost, The Wedge will keep the reader guessing to the very end. Highly recommended.

Synopsis: “The Wedge,” by Alan M. Weber, is a deftly crafted novel of political allegory, insight and intrigue. It centers on Steven Wellstone, a political scientist who becomes so frustrated with his efforts to expose the deceit and corruption in the political system that he decides to do the unthinkable. Only things don’t quite work out as he had planned….
Critique: An absolutely absorbing read from beginning to end, “The Wedge” is a story that could be tomorrow’s headlines given the corporate corruption that is the hallmark of our congressional system today. Impressively well written with unexpected twists and turns, “The Wedge” is highly recommended for community library General Fiction collections.  For personal reading lists it should be noted that “The Wedge” is also available in a Kindle edition ($4.99).

By Mike S. on September 8, 2015
Format: Kindle Edition Verified Purchase
A Great Read !!
Alan Weber is a very good writer as well as a thoughtful commentator on political matters. In The Wedge, he has tightly focused his attention on the absurd process by which we elect presidents here in the U.S. and has basically turned the process inside out. By the end I was hoping that someone in our upcoming presidential election will take the same approach as Alan’s main character.
This was a very enjoyable read, and I’m looking forward to more from this author.

By Amazon Customer on April 16, 2016
Format: Paperback
This book may awaken and expand your understanding and essential participation in an experience called Democracy.
“The Wedge” is a fascinating page turner, a must read that totally and brilliantly relates to the present political climate. I was always anxious to know the outcome until it was surprisingly revealed. I “feel the Bern” through this book and see that whatever he does will be continued in the hearts, minds and actions of each generation until we shall overcome. This book rises to the challenge.